A key challenge of conventional CBC hematology analyzers is discrimination among different cellular elements that fall in similar regions of a histogram, making it difficult to differentiate one from another. Another key limitation of most analyzers is that data obtained in each module is analyzed independently. Often information from one module can be useful to the detection of interfering particles in another module, but the opportunity is missed because there is no communication between the modules.

Because of the analyzer’s inability to communicate between modules, technologists in the laboratory are required to interpret this information, which ultimately leads to increased costs and labor, plus an enhanced risk of human error in the process

Absolute DXS uses newer analyzers with VCNs technology that have the ability to access data from multiple histograms where in addition  to  volume and conductivity, several additional cellular measurements can be obtained for each individual cell,  including but not limited to five different angles of light scatter and pulse time. 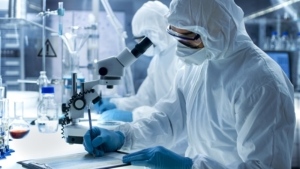